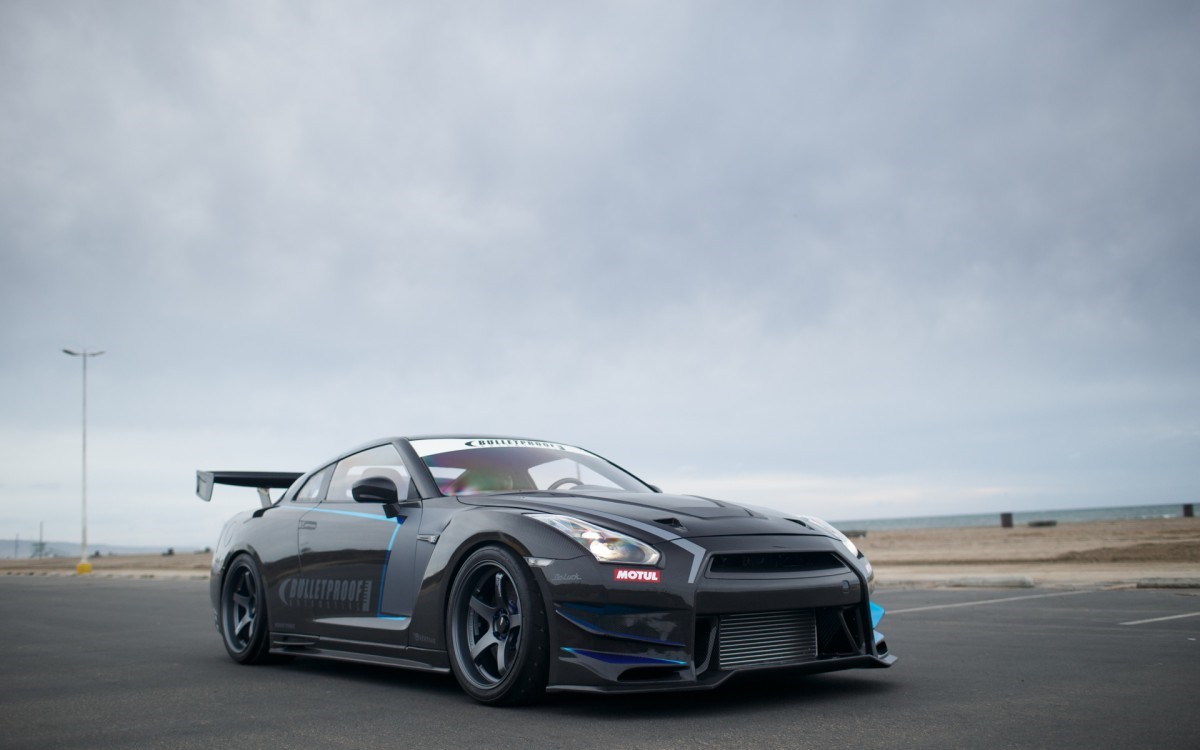 Is the Nissan GT-R a tuner car? If you consider all the highly modified versions of Nissan’s AWD monster out there, then yes, it certainly it is. But for me the GT-R has always sat on its own pedestal. If you take a popular Japanese car like the Honda Civic, Nissan Silvia or Mazda MX-5, you’ll find a lot of the appeal comes from their potential if not from their factory performance capabilities. Even a newer model like the Toyota 86 feels like it was designed to be modified from the get-go. There’s something great about that.

But what about the GT-R? When the R32 Skyline GT-R debuted in the late ’80s it was a revelation. It might have been a car capable of outperforming the greatest sports cars in the world right off the showroom floor, but that didn’t stop tuners in Japan from quickly digging into the R32 and subsequent Skyline GT-R models to make them perform even better. An entire culture sprung up around the legend of the GT-R.

It was the same story when the R35 model debuted back in late 2007 – only more so. Once motoring journalists got hold of the car, they discovered that the GT-R was one of the fastest cars available at anyprice. Right out of the box, it was ridiculously quick, handled like few cars in the world, and its limits were way higher than anyone could hope to approach outside of a (large) race track environment.

I’ve always thought you’d have to be a little on the crazy side to drive a car like the R35 and then proclaim ‘this thing just isn’t fast enough’. But plenty of people have, and it’s the automotive exploits of those crazy folks which we Speedhunters spend so much time writing about. Within days of the R35 going on sale, tuners were already tearing into the car seeing what could be improved.

In the years since, builders from all over the world have been cranking out modified R35s. Some are simple bolt-on affairs while other have been rebuilt from the ground up. They’ve been used for everything from drag racing and drifting to time attack and standing mile events.

That brings us to Bulletproof Automotive, a company which has been distributing high-end Japanese tuning parts around the world for a decade and a half now. Over the years Ben Schaffer and the Bulletproof team have not only worked with Japan’s most respected tuning companies, they’ve built a number of cars to demonstrate these parts.

Bulletproof’s business grew massively with the launch of the R35 and the tuning market that surrounds it, and over the years they’ve built a few different GT-R demo cars to show off the goods. The car you’re looking at here might be the most impressive yet.

Putting Godzilla On A Diet

While most would agree that the R35 GT-R is an amazing machine right out of the box, the largest downside to the platform is easily its weight. The car is blindingly quick, but it still lacks the agility and reflex that some might expect from a world-class performance car.

So when Ben and the Bulletproof team started to plan out the idea for this 2012 R35 known as the GT-R SPL, weight savings was at the top of the priority list. Of course, the cheapest and easiest way of shedding mass would be to strip out the interior and remove creature comforts, but that’s not what Ben wanted to do.

Rather than going for the stripped-out racecar approach, the goal was to have something that would retain all of the GT-R’s road-going refinement and creature comforts, while at the same add sense of nimbleness and response not found in a stock GT-R. This balance between weight and comfort would prove to be the core concept behind the build.

Fortunately, Bulletproof has built relationships with some of Japan’s most well respected tuning houses and among this list of partners is Overtake – the makers of the all-carbon GT-R that Dino drove last year.

Having seen what Overtake was capable of, Ben knew that a full dry carbon conversion would be the perfect starting point for his plan of trimming lots of weight without compromising on comfort.

And so Bulletproof specced out a complete Overtake dry carbon conversion and soon the parts were on the way from Japan to the company’s home base in Southern California. If you read Dino’s story about the Overtake GT-R in Japan, then you’ll know the carbon conversion is as thorough as it gets.

Among the lightweight dry carbon parts fitted to the car are the hood, front bumper, front fenders, doors, rear quarter panels, rear bumper and just about every other body component you can think of. Out back, the Overtake package is matched with an Esprit dry carbon GT wing with titanium mounts.

Aside from from the big parts on the exterior, many of the smaller components inside the car have also been replaced with carbon equivalents for max weight savings. Lexan windows help to shed even more pounds. It’s all part of the attention to detail and balance that defines this GT-R.

I mentioned a moment ago that from the beginning the idea for the build was to retain the GT-R’s comfort and refinement. But when it came to the interior, Bulletproof actually improved the car’s luxury factor, and by a large degree.

The entire cockpit has been refinished with gray and black Alcantara upholstery, which gives the Nissan the feel of a European exotic rather than a Japanese performance car. The thought was, if the rest of the car was going to be running a full array of exotic and expensive parts, then the interior should be improved to match.

Aside from the high-end trimming, the cabin also features a pair of Recaro SR-7 seats for both the driver and passenger, and they fit perfectly with the rest of the car’s interior treatment.

Even with the more luxurious interior, the car still tips the scales some 375lbs lighter than a stock GT-R, and that’s a significant difference – one that betters every area of the car’s performance and greatly improves its agility and the driver’s excitement level.

What about power you ask? Well, the goal with the GT-R SPL was never to be a horsepower monster, but that doesn’t mean that the VR38DETT has gone unaltered.

The engine has actually been fitted with Bulletproof Automotive’s SPL power package. The details of this upgrade are still secret, but let’s just say it makes for a solid increase in power without impacting on drivability.

Aside from that, the car is equipped with a number of proven tuning parts from Japan, including an Overtake Saikou 100-V exhaust by Powerhouse Amuse and a GReddy front-mount intercooler kit.

While more thorough power upgrades haven’t been ruled out for the future, a big part of the build was being able to create something very fast and very special without having outrageous horsepower. It’s all part of the balanced approach that you see so often with Japanese tuners.

And of course you can’t talk about balance without addressing the suspension and brakes, which on this car are handled by a set of Overtake/Sachs dampers and an Overtake Carbon SL brake package respectively.

The exotic, weight-saving brakes sit behind a set of 20-inch Advan Racing GT wheels with Toyo R888 tires. It’s hard to think of a much better combo than that in terms of both style and functionality.

For now the plan with the GT-R SPL is to proceed with some small tweaks while dialing in the suspension setup on the track and in the canyons of Southern California. Eventually, the hope is to take the car to Germany and conquer the Nürburgring, just as Bulletproof did with their FR-S in Japan.

So yes, the GT-R is a car that is incredible right off the showroom floor. But as Bulletproof and its international partners have shown with this project, there’s always room for improvement. What’s not to like about a GT-R with a lot less weight, more power, and some exotic touches both inside and out? There will always be something cool about taking a car that’s already great and making it significantly  better.